Neal F. Perryman is the Chair of the Firm's Litigation Department. Neal focuses his law practice on labor and employment law, but he also regularly practices in the areas of ERISA litigation, complex commercial litigation, appellate practice, education law, and municipal law. Neal defends employers and management in personnel-related disputes before state and federal courts, arbitration panels, and administrative agencies. He regularly counsels clients on compliance with federal and state employment and labor-related issues, including union contract negotiations, and on best management and governance practices. In addition, Neal represents clients in other types of complex litigation matters. He has successfully tried cases for clients in various jurisdictions, including in "bet-the-company" -type matters. He has also successfully argued numerous appeals in various state and federal appeals courts.

After an 11-day trial in 2008, Neal, serving as lead counsel, gained one of the first jury verdicts under the then-new featherweight causation standard for Missouri Human Rights Act cases. He has successfully represented employers and ERISA plans in class actions, including a summary judgment for an employer-sponsored plan in an important cash-balance ERISA class action case, which decision was affirmed on appeal. In 2014, Neal won an appeal in a Title IX case of national significance, having represented the defendant-university as lead counsel in both district court and on appeal. These are just a few examples of Neal's practice and experience. Other examples can be referenced via the Case Studies tab, above.

Neal's commitment to continuing education is reflected in his reputation as an expert in his field. He frequently speaks on the topics of labor relations and employment law, among other topics. He regularly authors publications on topical labor and employment matters, and contributes to various handbooks and policies.

As a well-respected attorney in the Firm, Neal is a member of the Firm's Management Committee, and he is AV® Preeminent™ Peer Review Rated by Martindale-Hubbell. His peers selected him for inclusion in Best Lawyers® 2013-2023 and Missouri & Kansas Super Lawyers® 2008 and 2010-2022. Additionally, he was among the "Top 50" St. Louis area Super Lawyers® for 2011-2012 and 2018, receiving one of the highest scores in the selection process in each of those years. The St. Louis Business Journal named him among the "40 Under 40" Class of 2006. Neal is a fellow in the Trial Lawyer Honorary Society, Litigation Counsel of America. Finally, Neal was named to the POWER List in Employment Law by Missouri Lawyers Media for 2020-2022.

Neal is also very involved in the community, and he serves a number of organizations in leadership roles. In 2016, Neal was honored to receive the Lifetime Alumni Achievement Award from his alma mater, Westminster College, for his "significant accomplishments and contributions to society." 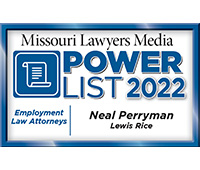 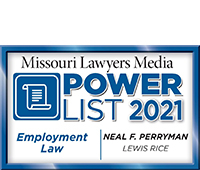 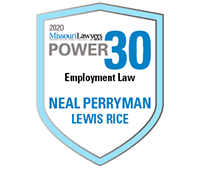