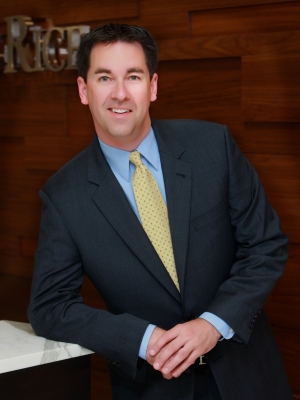 With more than two decades' experience, Michael J. Hickey focuses his practice on intellectual property litigation and prosecution, representing inventors and companies in diverse areas of technology including computers and telecommunications, medical devices, DNA and genomics research, chemical applications, and exercise equipment. His clients are individual inventors, startup companies, and significant market players including one of the largest bicycle component manufacturers in the world. His successes include winning summary judgment of patent non-infringement for a family-owned company where the opponent, a Fortune 100 company, sought more than $80 million in damages from his client.

Michael's practice covers patent, trademark, and copyright prosecution as well as significant commercial litigation and appellate work. He clerked for the Hon. Theodore McMillian of the U.S. Court of Appeals for the Eighth Circuit, and he has served as a professor of patent law for the Ongoing Examiner Education Program at the U.S. Patent and Trademark Office.

Michael presently serves on the Firm's Appellate Committee, and he previously served as a former Chair of the Firm's Recruiting Committee. He was selected for inclusion in Missouri & Kansas Rising Stars® 2010-2012 and Missouri & Kansas Super Lawyers® 2013-2022. Michael was also named by Best Lawyers® for 2019-2023. Additionally, St. Louis Business Journal listed him among their "40 Under 40" in 2011.