The IRS has released temporary and proposed regulations clarifying that partners in a partnership that owns a disregarded entity (DRE) may not be treated as "employees" of the DRE (T.D. 9766; REG-114307-15). As a result, such partners are subject to self-employment tax on amounts received from the DRE and are not permitted to participate in certain tax-favored employee benefit plans.

Overview of the Regulations

The following example illustrates of the type of situation addressed by the regulations. 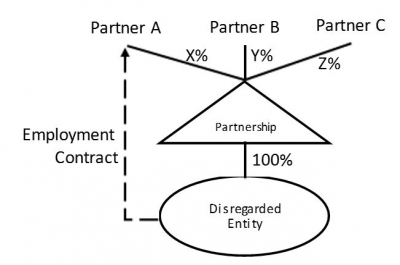 The new regulations clarify that Partner A is not treated as an employee of the DRE. As a result, Partner A would be subject to self-employment tax on compensation received from the DRE and would not be entitled to participate in tax-favored employee benefit plans operated by the DRE.

Impact of the Temporary and Proposed Regulations

As a result of the issuance of the temporary and proposed regulations, partnerships who have been treating partners as employees of DREs will have to cease doing so and will be required to make adjustments to their payroll systems. In additions, partners employed by the DRE will not be permitted to participate in tax-favored employee benefit plans.

The New Regulations Provide for a Delayed Effective Date

In order to allow taxpayers adequate time to comply with the temporary regulations, these provide for a deferred effective date. The temporary regulations will apply on the later of (1) August 1, 2016, or (2) the first day of the latest-starting plan year following May 4, 2016, of an "affected plan" (based on the plans adopted before, and the plan years in effect as of, May 4, 2016) sponsored by an entity that is disregarded as an entity separate from its owner. For this purpose, an affected plan includes any qualified plan, health plan, or Section 125 cafeteria plan if the plan benefits participants whose employment status is affected by the temporary and proposed regulations.

Limitations on the New Regulations

Partnerships should be aware of two significant caveats with respect to the new regulations.