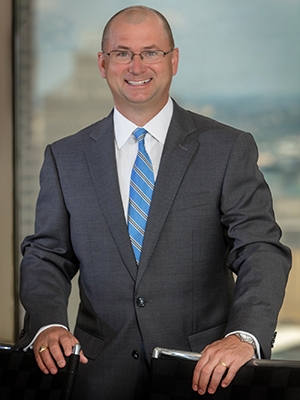 As a well-respected attorney at Lewis Rice, Tom is a member of the Firm's Management Committee and serves as the Firm's General Counsel. In that role, Tom advises and protects the firm and its lawyers on professional ethics, risk management, and related professional responsibility matters. He has been selected by his peers for inclusion in The Best Lawyers in America® 2013-2023 and has been included in Missouri and Kansas Super Lawyers® for 2013-2021.

As a young attorney, Tom served as the prosecuting attorney for the cities of Town & Country and Kirkwood in St. Louis County, where he prosecuted hundreds of criminal and housing cases and tried dozens of cases in the municipal and county courts. Since that time, he has handled numerous state and municipal criminal matters to successful conclusion.

Tom is actively involved in his community and holds various positions with several St. Louis community and nonprofit organizations. He was a member of the Class of 2003-2004 FOCUS St. Louis Leadership Program, which recognizes individuals who attain high levels of leadership in their respective fields and who demonstrate deep commitment to the community. Tom currently serves as a member and Vice Chair of the Board of Trustees of St. Louis University High School, where he also has long served on the Alumni Board. He is the current President of the Board of Governors of the Racquet Club of St. Louis and is a past President of the Board of Governors of Greenbriar Hills Country Club in Kirkwood, MO.