The Kansas City law office of Lewis Rice is proud to announce the selection of Thomas R. Larson as Fellow into the Litigation Counsel of America (LCA), a trial lawyer honorary society. Composed of less than half of one percent of American lawyers, fellowship in the LCA is by invitation only and highly selective. Larson will be officially inducted at LCA's Spring Conference and Induction of Fellows in Scottsdale, Arizona on April 21, 2016

Larson has distinguished himself over the past four decades as among the top trial lawyers in the region. He has served as lead trial counsel on more than 50 jury trials with a winning percentage of 85%. In addition to his jury trial success, appellate cases handled or briefed by him have helped to shape Missouri law, including designing a jury instruction approved by the Missouri Supreme Court for submitting comparative fault on the part of a plaintiff in a products liability case, establishing rules limiting the availability of punitive damages, and establishing rules that limit the liability of a component part manufacturer.

"My goal has always been to find innovative strategies to obtain quick and successful matter resolutions in the best interest of our clients," Larson said. "It is an honor to be recognized by the LCA and included among such an esteemed group of successful trial lawyers." 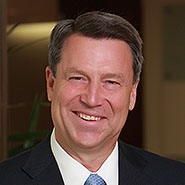