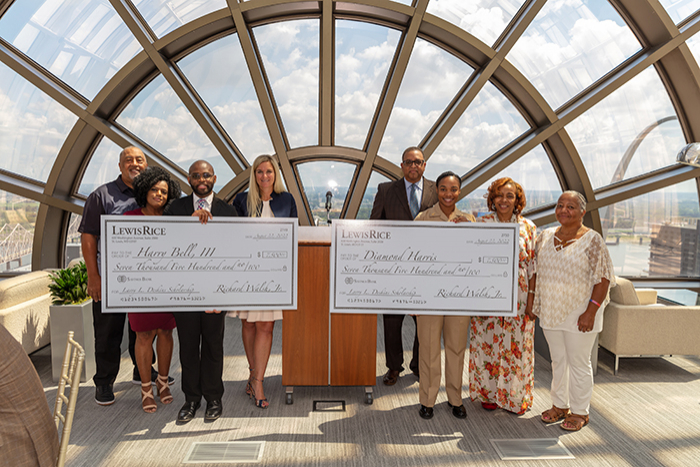 The scholarship, which honors Lewis Rice’s late partner Larry L. Deskins, awards $7,500 scholarships to two first-year law students at Washington University, Saint Louis University or University of Missouri law schools who are members of economically disadvantaged or underrepresented groups in the legal profession. Scholarship funds were awarded to Harry and Diamond this summer and will be used for tuition and expenses during their second year of law school.

Harry has a master’s degree in public administration with an emphasis in local government from Northern Illinois University in Dekalb, Illinois. He is involved in the Black Law Student Association and Health Law Association at University of Missouri School of Law.

“The Larry L. Deskins Scholarship will assist me in obtaining a legal education, which in turn will provide me with the skills necessary to connect important theoretical concepts to real world scenarios that I will face in my day-to-day work as a practicing attorney,” Harry said.

Harry and Diamond were honored during an award ceremony on August 22, 2022 at Lewis Rice's downtown office and will be featured on Lewis Rice’s website, social media, and other publications. The Larry L. Deskins Scholarship is part of Lewis Rice’s “Next Level” Diversity and Inclusion Programs created to proactively promote diversity, equity and inclusion in the legal industry.