Lewis Rice attorney Kenneth “Chip” Mallin, Jr., has nothing but fond memories of Fair Saint Louis. As a kid, he enjoyed watching the parade and air shows; later, he worked in concessions, making sure the workers didn’t run out of cups.

“Because my dad was involved with Fair for a long time, I’ve been around it most of my life,” he said. “I love being a part of it.”

Today, Chip is serving his second year as Chair of the Programming Committee, which is responsible for the Fair’s music, airshow, fireworks and Salute to the Troops program. He is also a liaison between the fireworks committee and Fair St. Louis leadership to ensure the fireworks display goes off without a hitch.

While balancing a full-time job in the Firm’s litigation department, Chip says he loves being able to give back to St. Louis in a big way. “You don’t get an event like this in every city,” he said. “It’s a free event for the city that has something for everyone, whether you enjoy live music, delicious food or the air show.”

Planning for Fair Saint Louis typically starts two weeks after the previous event has ended. Chip said each year, they think about ways to make the event bigger and better. “It never disappoints in terms of something new and different. Our committee does a great job spotting up-and-coming artists.”

Though Chip is looking forward to many of the activities and performances slated this year, he says he always enjoys the opportunity to work with a great team of volunteers who want to help make it a success. “It makes life a lot easier when you get to work with some fantastic people,” he said. “We all work hard to put on a great free event for St. Louis.” 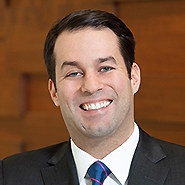