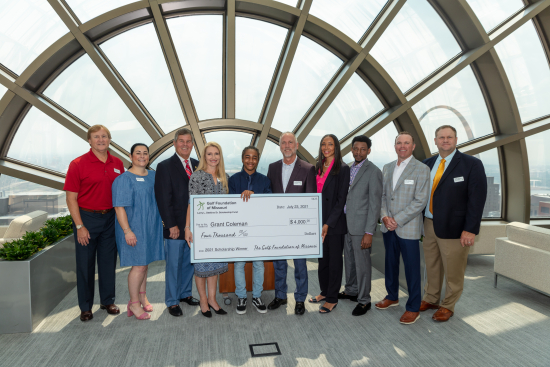 Golf Foundation of Missouri Board Members with Grant Coleman (center)

The Golf Foundation of Missouri (GFM) awarded the first Larry L. Deskins, Sr. Scholarship to golf camp alumnus Grant Coleman. Lewis Rice, where the late Larry L. Deskins, Sr. practiced for more than four decades, hosted the ceremony to celebrate Grant and commemorate Larry. Grant is a 2021 graduate of Metro Academic and Classical High School and will be attending college in Chicago this fall to study environmental science.

The Larry L. Deskins, Sr. Scholarship was founded in 2020 to honor Larry and recognize his impact on St. Louis. He was the first African American partner at Lewis Rice and a long-time GFM board member. He was widely recognized for his work and service.

Like Deskins, Grant wants to make an impact in his hometown, St. Louis:

"I want to eliminate food deserts in the poorer socioeconomic areas in St. Louis and improve the quality and availability of food for people who need it,” Coleman said. “Moreover, I want to work with St. Louis’ architects and combine efforts to plan toward more sustainable, energy efficient and fashionable architecture. I also want to work with ecologists to help preserve biodiversity in places in St. Louis and beyond."

GFM has a long-standing relationship with St. Louis. It has been the home of GFM since its camp’s inception in 2004 at The Highlands Golf Course (formerly St. Louis Amateur Athletic Association, or Triple A). Several years ago, city officials acknowledged GFM’s efforts by requesting GFM to conduct a second six-week camp for its community youth initiative through its Playtime & Rec program. This relationship affirms the city’s commitment to its youth and that GFM’s efforts are having a positive impact on young children in St. Louis.

GFM plans to award one to two scholarships annually through the Larry L. Deskins, Sr. Scholarship to qualified graduating seniors who have participated in its summer camps through city programs and community partners. GFM is proud to award this year’s scholarship to Grant.

Larry believed in giving back to the community, developing young minds, and that education and hard work are the keys to success. He mentored and inspired young African American men and women on the importance of these principles and helped them expand their minds and pursue their dreams — impactful dreams like Grant's.

About the Golf Foundation of Missouri