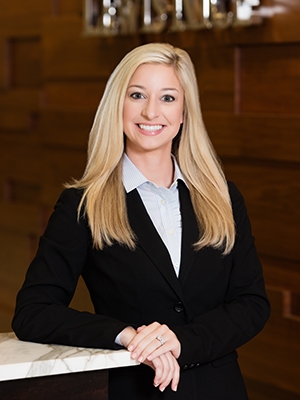 The St. Louis office of Lewis Rice is pleased to announce the following attorneys joined the Firm as associates. Lauren Carey and Daniel Slawski previously participated in the Lewis Rice Summer Associate Program.

Michael Armstrong will practice in the Litigation Department. He received his J.D. from Washington University School of Law. Most recently, Michael was a law clerk to Chief Judge Michael J. Reagan for the U.S. District Court for the Southern District of Illinois.

Lauren R. Carey will practice in the Corporate Department. She received her J.D. from Saint Louis University School of Law. She spent two summers with Lewis Rice as a summer associate, and she served as judicial extern for the Hon. Rodney Sippel for the U.S. District Court for the Eastern District of Missouri.

Matthew J. Haas will practice in the Litigation Department. Matt received his J.D. from Saint Louis University School of Law. Previously, he worked for Brown & James as a senior associate, where he focused on defending insurance companies in contractual coverage disputes.

Ryan M. Hehner will practice in the Corporate Department. He received his J.D. from the University of Chicago School of Law. Ryan spent the last three years as an associate at Kirkland & Ellis, focusing primarily on chapter 11 corporate reorganizations.

Daniel P. Slawski will practice in the Corporate Department. Dan received his J.D. from Vanderbilt University School of Law. Prior to law school, he spent two and half years as the practice administrator of a multi-specialty orthopedic practice. Dan spent one summer with Lewis Rice as a summer associate.

Throughout the Firm's history, Lewis Rice attorneys have made excellence the foundation of their practice. Founded in 1909, more than a century of service gives the Firm the experience, resources and tools to serve their clients' dynamic needs. A diverse team of more than 160 attorneys provides counsel and solutions for the challenges facing local, regional and national businesses, as well as individuals and families. Lewis Rice maintains offices in downtown St. Louis, suburban Town & Country, Washington and Jefferson City, Missouri and Edwardsville, Illinois. The Firm also has offices in downtown Kansas City, Missouri and suburban Overland Park, Kansas.