Having five children at home (and being a kid at heart), Ben enjoys working with clients in the toy and game industry. Toys and games present unique legal challenges, especially in the area of intellectual property, due to the difficulty of acquiring legal protection for how the game is played. A recognized thought leader on emerging issues in the gaming industry, Ben is a contributing author to the American Bar Association's (ABA) Legal Guide to Video Game Development, now on its second edition, and has written about new challenges in the board game industry for the ABA's journal on intellectual property (IP) law, Landslide.

A gamer since the days of the Atari 2600, Ben first learned to program using a GW-BASIC interpreter in the 1980s, writing elementary text-based games. After learning Pascal in high school, Ben picked up C and C++ in college and honed his skills by developing games.

In the 1990s, before the commercial online gaming industry matured, Ben worked on a number of free online games. He worked with open source code bases, chiefly DikuMUD derivatives such as Merc and ROM. As the commercial online gaming market emerged, Ben updated these code bases with more modern programming techniques and game design principles. Upon discontinuing game development to focus on law school, he released a modified ROM2.4 code base under an open source license.

Additionally, Ben designed a wholly original multiplayer on-line game system, dubbed Archon, which features an open communications protocol enabling players to build their own game clients on any platform from PCs to mobile phones, allowing for simultaneous multi-platform play through both text and graphical interfaces. He is currently developing a multi-threaded Ubuntu Linux implementation of the server in C++.

In addition to designing and writing games, Ben sometimes finds time for just one more turn of Civilization VI and administers a collaborative Minecraft server used by several Lewis Rice attorneys and their families to enjoy grief-free gaming. He can also be found playing Hearthstone and anything from the St. Louis-based Butterscotch Shenanigans studio.

Ben also refurbished a vintage cocktail table Pac-Man machine, which now lives in his office. His children sometimes play it on weekends when they accompany Ben to the office, and Ben hosts an annual Pac-Man tournament/pizza party for the Firm's summer associates. 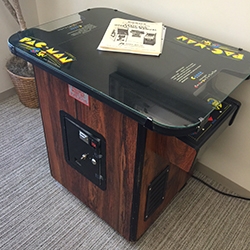